Top Ten Tuesday: 5 Books I Recommend and 5 Books People Tell Me I MUST Read


Ok, once again I will be modifying the Top Ten Tuesday topic a bit. The topic is supposed to be, "Ten books people have been telling you you MUST read". This is tough, because I'm the one who usually does the recommending. It's my job. So, I'm going to be a rebel (again) and switch things up. I could only really think of five books that people have been telling me (repeatedly) that I MUST read. I decided to fill in the other five slots with books that I recommend (repeatedly) based on other popular books/series people are reading now. First up:

Side Effects May Vary by Julie Murphy 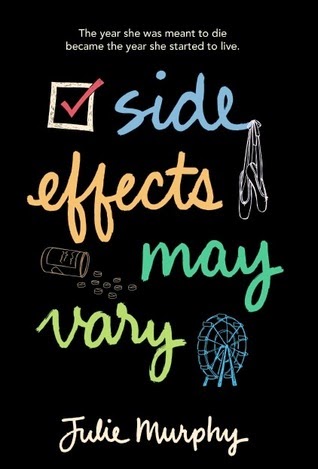 For those who liked The Fault In Our Stars, I recommend this book about a girl who is diagnosed with terminal cancer and later finds out that her cancer has gone into remission. This would normally be a good thing, but while she thought she was dying, she completed her bucket list, which includes getting revenge on a few people. Now that she has a second chance at life, she has to deal with the consequences of what she's done. Not only that, but she also has to figure out how to live like she's living, and not like she's dying. A wonderful book, so far it's at the top of my list for the year.
(And yes, there is a romance) 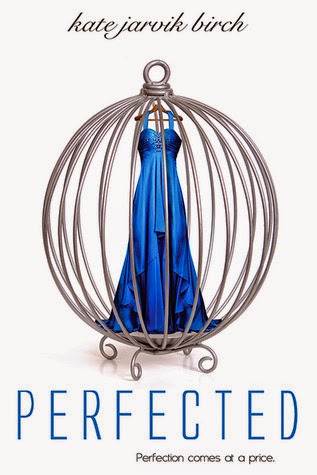 Fans of Lauren DeStefano's Chemical Garden trilogy MUST read this beautiful book. It's a new thing to obsess over, trust me. I reviewed it a few weeks ago, check it out here. It's set in the not-too-distant future, and a law has passed allowing human girls to be bred and kept as "Pets". When a girl is "adopted" by a rich and powerful man, a forbidden romance begins between her and his rebellious son. They must decide if love is reason enough to leave their elegant lifestyle behind and fight the system. One of my favorite books so far this year. 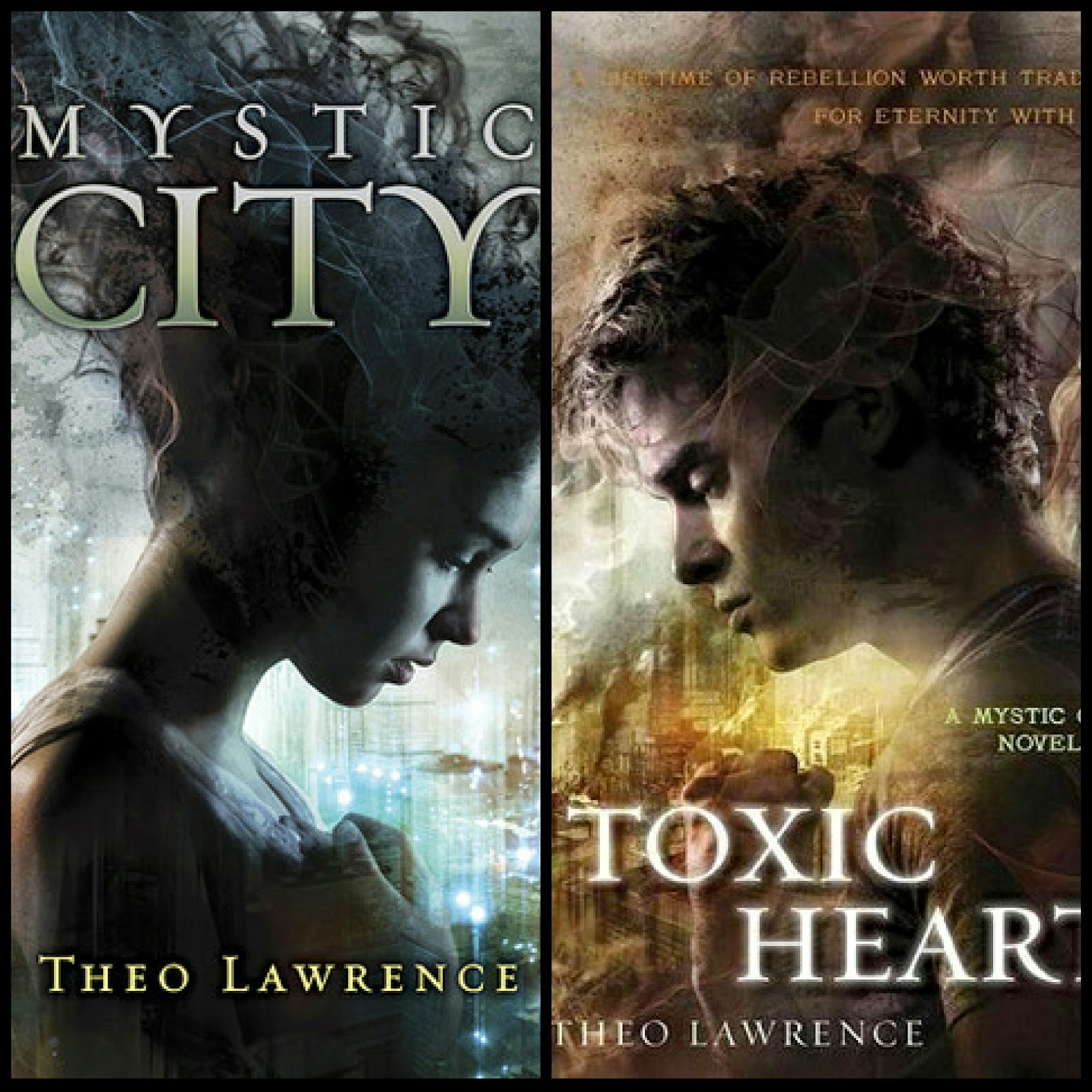 Fans of The Mortal Instruments series by Cassandra Clare will enjoy this series. It's set in a dystopian, future New York City where magic is forbidden, but it doesn't stop the rich and powerful from using and abusing it. The only problem is that in order to get this magic, they have to harvest it from those who have powers, leaving them drained and weak. For too long they have gotten away with it, and revolution is on the horizon. Stuck in the middle of it all is Aria Rose, daughter of one of the richest and most corrupt men in the city. She is involved in a star-crossed romance, but she has no memory of it. All she wants is to make sense of everything going on around her, but her questions plunge her deeper into the underground world of magic, and when she meets a gorgeous rebel boy, her world is turned upside down forever. READ THEM!!! 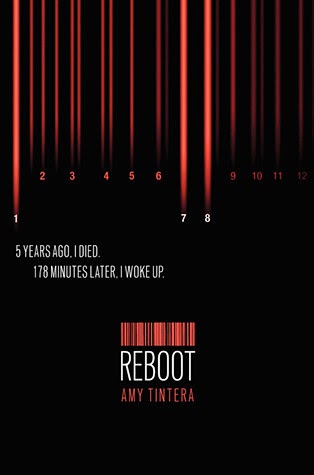 Fans of the Divergent series should give Reboot a try. The main character is a totally badass kick-butt chick. It's set in a dystopian future where a virus has killed much of the population, but some of them, the younger victims, are coming back to life. The longer they are dead, the less they retain of their humanity. The government uses this to their advantage and forces them to work as super-soldiers. This is about a girl who was dead for 178 minutes, longer than anyone else. She's basically a machine. When she takes on the challenge of training a smartass guy who was only dead for 22 minutes, she begins to think her humaity isn't totally lost. She is also just about done taking orders...

Before I Fall by Lauren Oliver 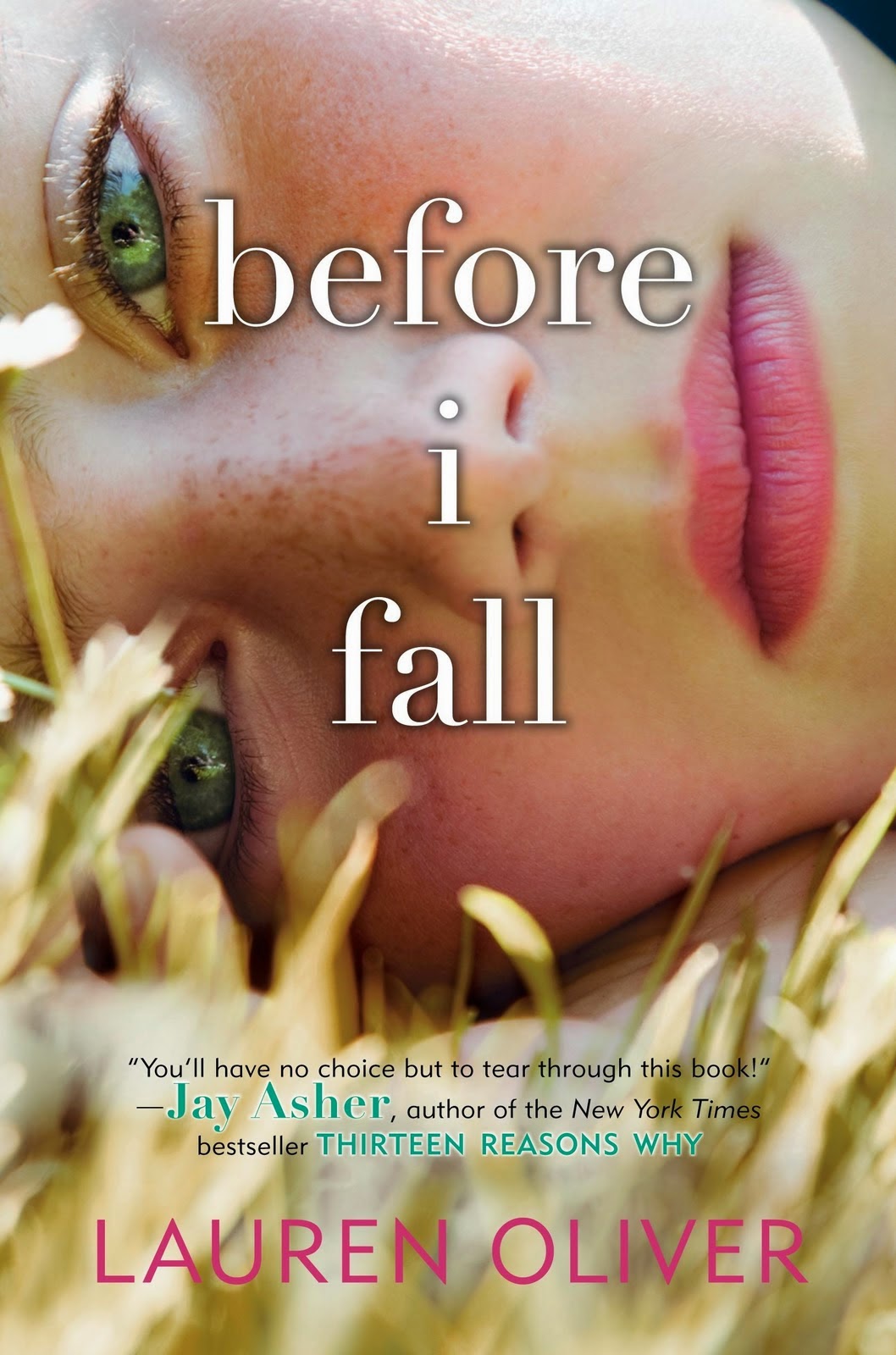 *This is my favorite book*

If you read and loved If I Stay by Gayle Forman and want to know what to read next, look no further. It's just as sad, and it is heartbreakingly beautiful. It will change the way you view the world. Here is the link to my review of Before I Fall on Goodreads (click here), it says it all. You MUST read this book.

The Diviners by Libba Bray 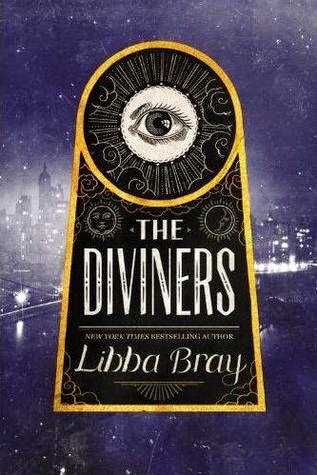 I know! Don't hate me because I haven't read this yet! People have been telling me I have to and I really want to read it, too. I LOVE Libba Bray and I have been assured of the creepy goodness of The Diviners. I figure that I have some time to read this because The sequel isn't out until next April. 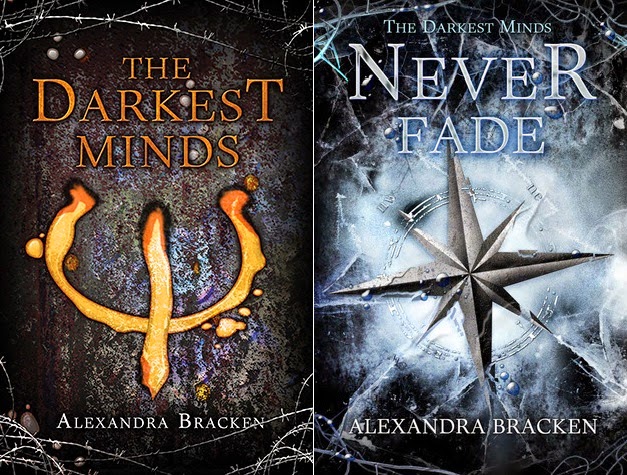 This dystopian series is exactly the type of book I love to read and I have been told by many people to get started on it. I have a feeling that it will quickly become a favorite series. Book Three releases in October, so at least I'll have them all and I can read them all back-to-back with no waiting!

The Arcana Chronicles by Kresley Cole 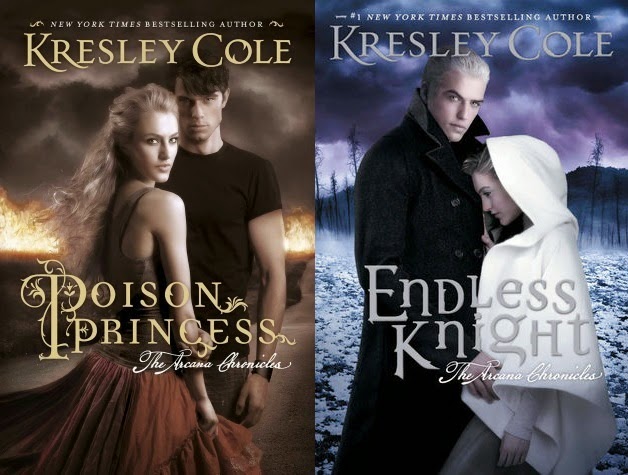 If I don't read these soon I fear my friend Morgan is going to hunt me down, tie me to a chair and turn the pages for me while I read. Book three will be out in January, so I have a little time...unless I am hunted down before then...

The Naturals by Jennifer Lynn Barnes 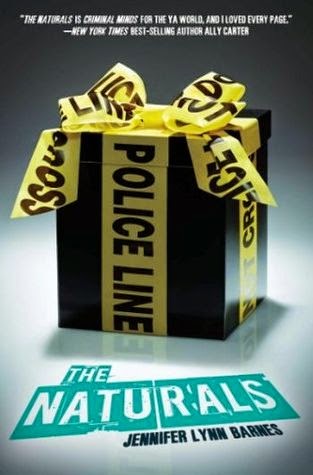 This was recommended to me by Rachel Caine (author of The Morganville Vampires series). Every time I've seen her for the past year she has been telling me to read The Naturals. She said it's "brilliant" and she wishes she wrote it because she's jealous of how good it is. Wow. I should probably read it... 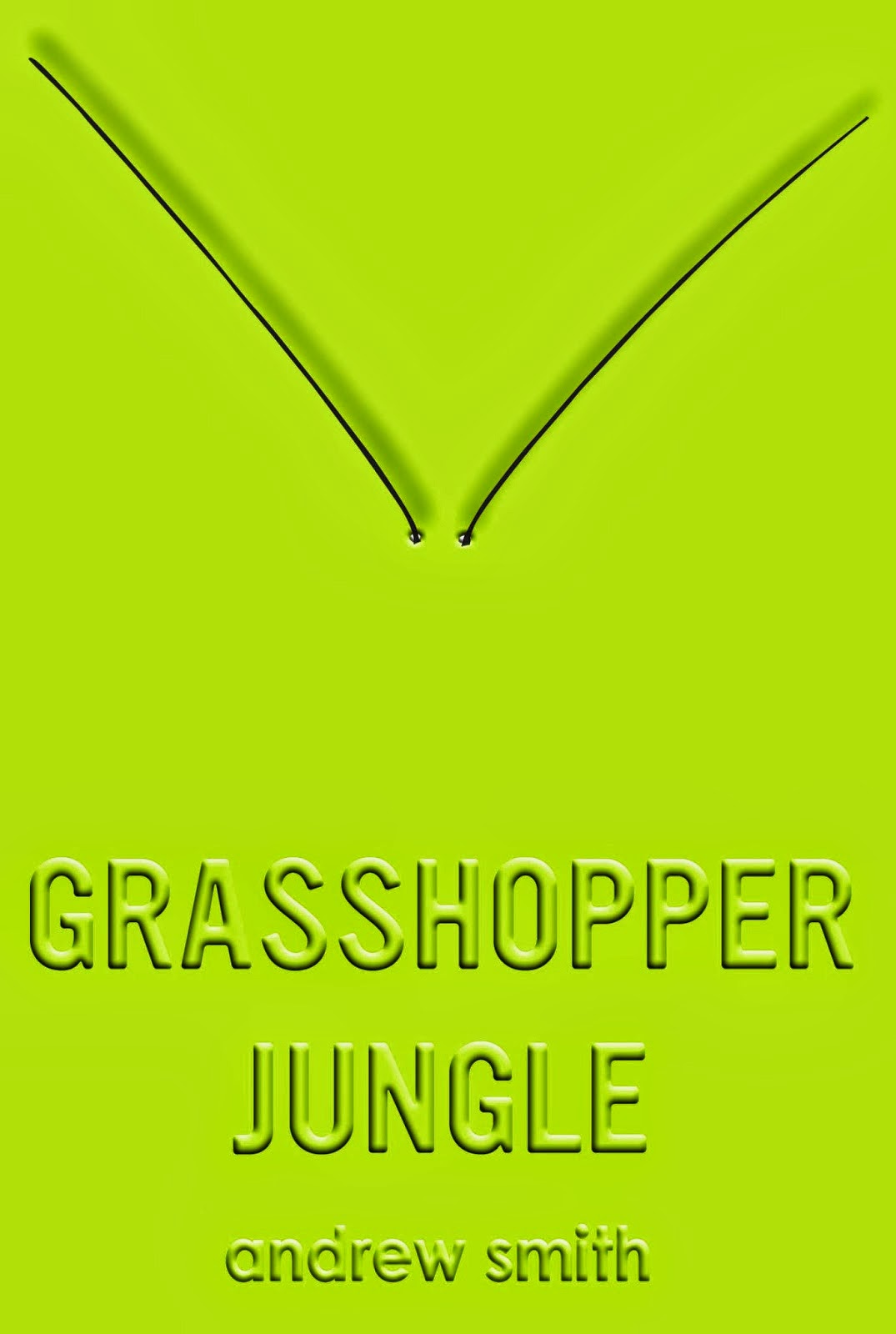 Ok, I admit that I'm a bit scared of this book. Giant praying mantises destroying the world...ok...BUT, it comes HIGHLY recommended by my dear friend Jen as well as the awesome and amazing A.S. King (author of Ask the Passengers). I trust them both, so I will have to give it a try.

What are people telling you to read? Do you have any recommendations for me?

Posted by michellesminions at 12:24 PM